Last week’s work proved to be an interesting way of approaching the road curb detection problem, and a such, after the weekly discussion with the thesis advisor, it was agreed that more work should be done towards better understanding and perfecting this approach. Since this study would involve a lot sensor repositioning, varying both its height relative to ground and its pitch, a simulator was built in Gazebo in which the vehicle 3D model was loaded, and a simulated Sick LD-MRS 3D LIDAR was modelled allowing to easily adjust the two degrees of freedom mentioned above. In this model a standard road (width: 6m) with a side-walk (height: 0.15m, width: 1.5m ) on each side was also modelled in order to study the laser scan reflection on the side-walk curb. The images below show some examples of the various gathered scan configurations.

The next step was to gather the laser scan data for each case a create a node which converts the laser scan into a point cloud to allow for the analysis of the data. The node is not yet fully operational but this analysis will consists in evaluating the number of points in the vertical and horizontal section of the side-walk and their distance from the car for the various configurations. As a preliminary forecast justified by last week’s results we expect to see a greater number of point alongside the vertical stretch of the curb. The next image shows the direct measurements of the LIDAR for one of the configurations. 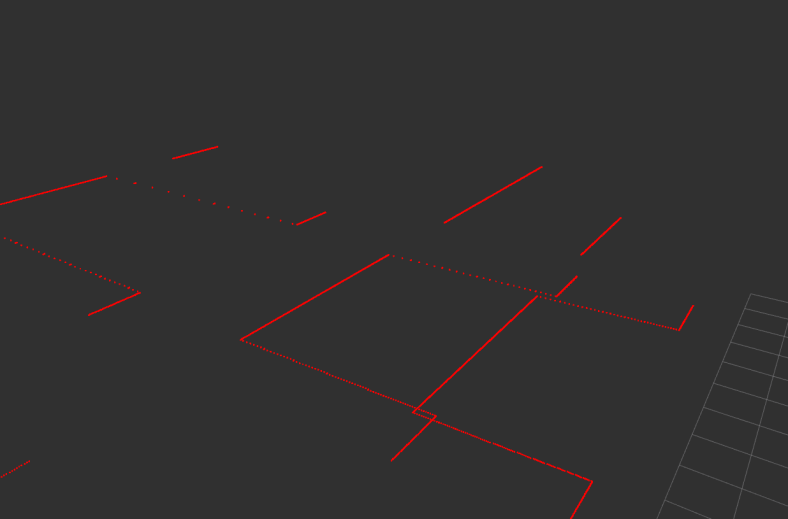 Despite this being an image of a single scan and not the the result of an accumulation we can see that the points alongside the vertical side of the side-walk almost form a line that corresponds to the edge of the road and with the accumulation this line will be even more noticeable, if we consider 3D distances the points on these lines will always have more points closer to each other than any others on the image, and this is what allows us to easily distinguish the sides of the road.

A side from the work mentioned above the bulk of this week was spent setting up the central processing unit of the ATLASCAR2. Most of the time was spent on correctly installing the graphics drivers for the hardware and moving the already developed code to the unit, adapting it to work alongside the nodes developed by the other colleagues also working on the ATLASCAR2 project.