Following the discussion with the thesis advisor, prof. Vítor Santos on Monday, it was agreed that the next step in development was the accumulation of the point-cloud data gathered from the LIDAR laser scans, and its representation relative to the “world” frame.

Following this guideline a new package was developed “road_reconstruction”, where the data from the LIDAR sensor is gathered and converted into a point-cloud which is then processed and accumulated over time, to create a representation of the perceived environment.

In order for the point-cloud accumulation to occur the vehicle needs to be moving relatively to a fixed frame (“world”)  so that the gathered data doesn’t “move” with the car. Following that, a simplification was considered for the time being, the car was given a straight line movement based on the velocity data received from the gps. With the car now moving the point-cloud accumulation node was developed and the result was as follows:

The image above represents a reconstruction using only the bottom laser scan form the LIDAR. This reconstructions uses a buffer of 400 points, which is about 40-50 consecutive scans. But as we can see there are two major problems,.Firstly despite this being data from the lowest  laser scan of the sensor, much of the road is not mapped, which suggests that the sensor is pointing to high for this application and will need to be lowered.  Secondly there are a lot of points that are to far away from the vehicle, and so are of  no interest in this context. To solve that a filter was developed to remove said points. The filter calculates the distance from each point of the cloud to the centre of the car, compares it to a defined distance and eliminates it if its greater. The resulting cloud is a lot cleaner than the previous: 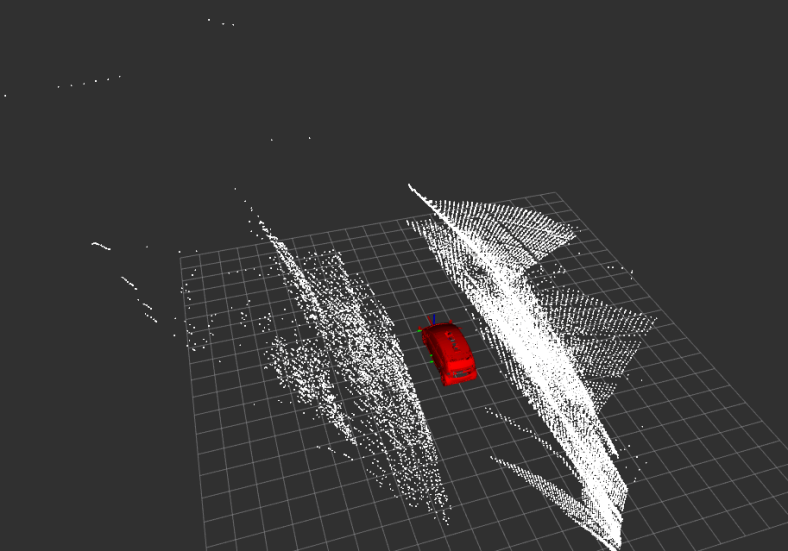 But there are still some points that are not being filtered, most likely because the filter hasn’t finished its processing by the time a new point-cloud arrives, so the code will need to be optimized to resolve this issue.

With the point-cloud accumulation nearly finished, during next week, in addition to solving the issues mentioned above, the focus will be primarily on the positioning of the vehicle relative to the fixed frame, so that the reconstruction correctly represents the topology of the road (turns, straight roads, roundabouts etc. ).